You are here: Home / Entertainment / Disney’s Hop to the Music Giveaway

“I received the Hop To The Music pack as a member of the Entertainment New Media Network. No further compensation was received and all opinions are my own. This post may also contain affiliate links.”

This spring get ready to Hop to the Music with your favorite Disney Music albums! #DisneyMusic #ENMN These albums are available at Disney’s Music Emporium.

Disney’s Into the Woods Soundtrack:

Into the Woods is a great musical and the CD does not disappoint. I love that the 2-disc CD includes a lyrics booklet so you can sing along. The vocals in this musical are outstanding!!  I give the Into the Woods Soundtrack 5/5 stars.

Disney Junior DJ Shuffle 2 is such a cute CD! You have several cute songs from each of the hit shows: Sophia the First, Doc McStuffins, Jake and the Neverland Pirates, Sheriff Callie’s Wild West,  Henry Hugglemonster, and the Miles from Tomorrowland theme song! My favorite songs would have to be Remember Peter Pan and any song from Doc McStuffins. This CD also features 4 karaoke instrumental songs so kids can sing along to their favorite DJ tunes! Put the CD in your computer and find a couple cute games.  I give this CD 4/5 stars.

The Songs of Frozen:

Frozen: The Songs CD is just the singable songs from the original Frozen soundtrack. If you find yourself skipping half the of the original CD because of the instrumentals, you would be very interested in this version. The CD also comes with a cute mini-poster! My favorite song off the album is Frozen Heart. Since the music of Frozen is really good (though a getting a bit over played) I give the CD 5/5 Stars. 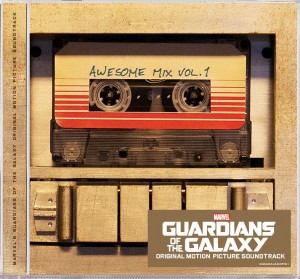 Guardians of the Galaxy: Awesome Mix Vol.1 is awesome! If you have seen Guardians of the Galaxy, you understand the importance of this CD and cover art. This album basically saves the galaxy by the way of Peter Quill. The songs are classics from the 70’s and 80’s, so you probably already know all the words to the songs. My favorite song would have to be O-o-h Child because it makes me think of the scene in the movie where Peter Quill tries to have the dance off with Ronin to distract him. I give the Guardians of the Galaxy CD 5/5 stars.

Ready for the giveaway? I am allowed to give away one set of these great CD’s. Giveaway ends April 4th, 2015. If it comes to this blogger’s attention that the winner of this giveaway has won on an additional blog for this same prize, this blog reserves the right to choose another winner.

Pixie Dust Savings and the participating bloggers are not responsible for prize fulfillment.

Hello! My name is April. I am a plus sized princess obsessed with Disney. I analyze Disney movies and I'm a true believer of the Pixar theory, collect Cinderella Memorabilia, and love Disneybounding. Do you love Disney but believe it is out of your price range? Pixie Dust Savings is here to help! Get money savings tips for everyday life and the vacation of your dreams.Read More…